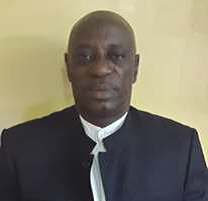 He joined the State Service as a Classroom Teacher and later transferred his service to the main stream State Civil Service. He has served in different Ministries, Departments and Agencies (MDAs) such as Lagos State Ministry of Agriculture and Cooperatives; Lagos State Coconut Development Authority ( LASCODA ) where he was the Assistant General Manager (AGM).

Currently, he is the Director of Enforcement and Advocacy in the Ministry of the Environment.

He has to his glory many awards and honours including: Certificate, Development in Nigeria Merit Award Nov, 2015; Fellow Institute of Corporate Administration (FCIA) July, 2015; Commendation Certificate in 2008 by the former Governor of Lagos State, His Excellency, Mr. Babatunde Raji Fashola as The Best Worker in the Ministry of Agriculture and Cooperatives, Lagos State; and Certificate of Commendation for Excellent performance in 2004 by His Excellency, the former Governor of Lagos State, Asiwaju Bola Ahmed Tinubu.

He is a former lecturer at the Centre for Environmental Science Education (CESE), Lagos State University, Ojo.

He is married with children.